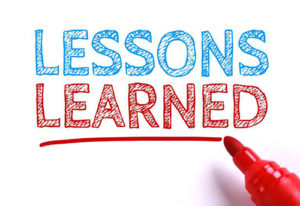 Lessons Learned is an educational series of webinars on financial management for your solar business presented by Leslie Shiner of The ShinerGroup and Annie Kendrick of Kendrick Business Services, LLC. The stories are fictional, and are used for illustration purposes only. They do not depict any actual person, company or event.

Perfecto Solar was growing rapidly and decided to bring on a new project manager/estimator who currently worked for a large, successful solar installation company. Management felt this addition to the team would be a perfect fit to fill the gaps in their experience with larger projects, since Perfecto Solar’s main clientele was currently residential and small commercial.

Sparky Jones was hired, and his first estimate for $1.9 million landed a large commercial project. This was larger than any project Perfecto Solar had ever been awarded and Sparky became a company hero! Sparky handled the contracts and management signed them in a rush before the deadline.

Trish the bookkeeper heard about the project through the company grapevine and started asking Sparky questions, so she could prepare. She asked for the project cost budget, but Sparky told her not to worry, as $1.9 million was plenty to cover the project scope, so it would be a waste of time to compile a budget. After she continued to ask for numbers, he finally provided her with his estimating spreadsheet, which she reviewed. She found multiple formula errors and no way to figure out what Sparky had in mind for estimated costs and markups.

Trish discussed her concerns with Sparky, but he dismissed them, and later told management, “Trish doesn’t know what she is doing.” He recommended that she be replaced with accounting professionals like he had at his previous company. Management trusted Sparky and started to doubt Trish.

Large vendor invoices started to arrive and Trish asked Sparky if there were purchase orders, so she could monitor cash flow and job costs. Sparky told Trish, “Purchase Orders just slow the project down. You must not know how big, sophisticated companies operate: POs are only for small companies that have time for that sort of thing.”

Trish asked Sparky about invoicing the large project so she could pay the bills and have enough money to cover payroll for the big crew that Sparky hired. Sparky said he would handle the invoicing and give Trish the check when it arrived.

Trish started noticing bills and credit card charges for items that didn’t look necessary for the original project scope. She started asking questions about change orders, and whether or not any controls were in place for credit card use on what appeared to be personal expenses. Sparky said he had it all under control and would get the change orders worked out after the project was completed. He also stated that his crew occasionally needed to make personal purchases so they could stay on the job, and this was normal. He added that she really needed to do her research on how big companies operate.

Trish finally got the courage to have a serious talk with management about her concerns, after her casual remarks were repeatedly dismissed. By this time, management had decided she didn’t know what she was talking about, and since Sparky was the bigshot hero, Trish’s lack of experience with big projects must have been the problem. She was told that she just needed to get with the “Sparky Program” and start learning from him, since everyone but her could tell he knew what he was doing.

After the conversation with management, Trish knew that if Perfecto Solar continued down their current path, the company would go under – so she found another job.

Eight months later Trish ran into an old co-worker and learned that Perfecto Solar had declared bankruptcy and shut down after Sparky’s big project cost the company over $2 million. It turned out that the commercial customer refused to pay for any changes and only paid part of the original contract costs since the fine print gave them a liquidated damages clause for every day the system was not in place. Aside from not being paid for any change orders, Perfecto Solar was back-charged $525,000 in liquidated damages.

Sparky Jones ended up leaving Perfecto Solar before the project was completed. He went to work for another company who heard he was looking for a job, and wanted to hire him based on his experience with large projects.

What did each of the characters do wrong in this story? Does your company need to set up project controls? Check out the pre-recorded webinar to find out more lessons learned.

This story is an extreme example of Lessons Learned, however the lack of project controls can cost solar companies thousands of dollars every year and cause financial hardship. To learn more about setting up project controls check out the pre-recorded webinar with Leslie Shiner of The ShinerGroup.

After you view the pre-recorded webinar you can find out more about the financial management program for Solar trade allies and other business development opportunities for your company.

Enroll in this program